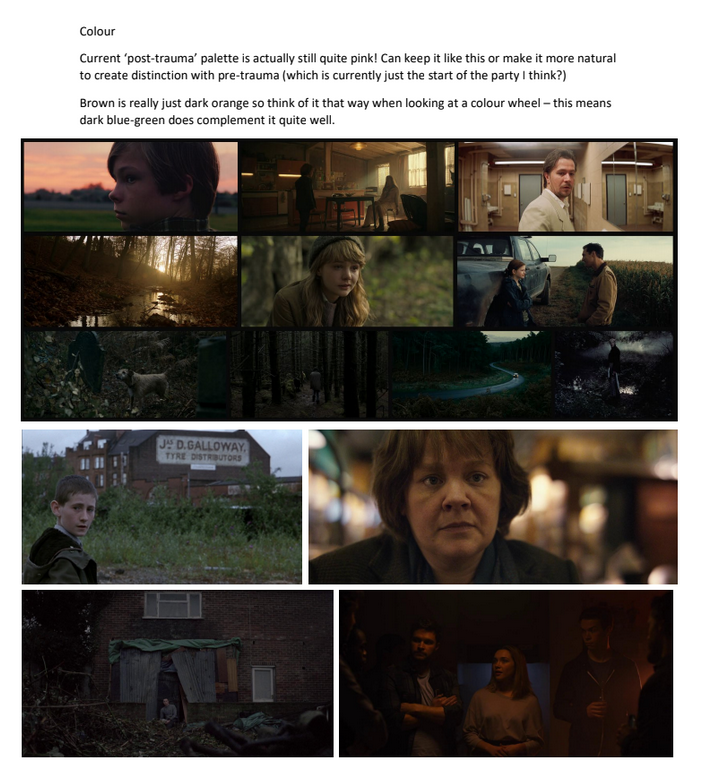 This week, I carried out some more camera tests, this time using the Blackmagic Ursa. I tried to recreate some of the scenes from my previous Alexa tests as closely as possible, allowing me to compare the dynamic range, grain, sharpness, exposure characteristics, and colour processing between the two cameras. I also tested the ergonomics of shooting handheld with the Ursa and found it to be significantly easier than with the Alexa. By being lighter, more compact and easier to handle, I found that the Ursa can give a much smoother and more controlled motion compared to the Alexa when used handheld and may therefore be more suitable for Wee Wild Flowers.

On Wednesday 3rd March, I went for a walk with Emma. We chatted about the latest draft of the script and I suggested adding more surreal/magical realist elements back in and making these more of a focal point for the story. Emma also showed me some updated character bios and a moodboard which shows her current intended colour palette for the film. I’m glad that I now have more visual input from Emma which I can work from and will develop this over the next few days into a full cinematography moodboard. I’m not completely sure about the focus on pink and low contrast scenes but I can be flexible to make this work. I do like the use of natural brown tones with strong red and black accents.

I also suggested that we create a ‘1 Page Pitch’ document as soon as possible. This would encourage us to lock down a visual style for the film (which we need to do ASAP) and would be useful for informing our social media design and as an introduction to the film for potential locations, funders and rental houses which we may seek support from. We set ourselves a deadline to create this by the start of next week, ahead of our social media launch.

On 4th March, I developed a large cinematography moodboard using shotdeck. I decided to isolate colour palette, lighting/contrast and framing into separate moodboards, allowing me to focus on each cinematography concept in turn and clearly identify the elements I am looking at in each reference shot. Despite this, I feel there is a good level of consistency across the whole moodboard. After talking it through with Emma, we made a more pared-down selection of a few key images which we both feel reflect our intentions in terms of colour, lighting and framing.

On the 6th, we had a whole group meeting to brief everyone on our new intentions and share plans for our social media launch.